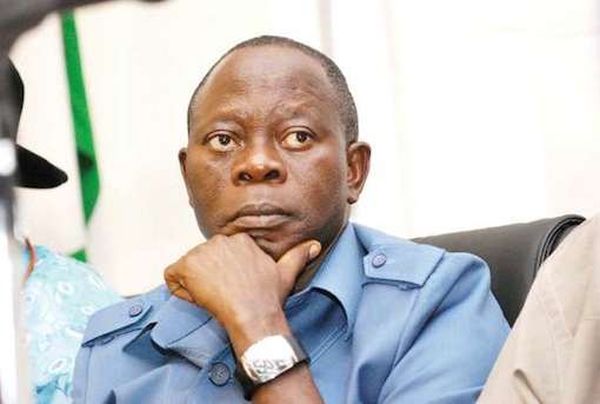 Governors elected on the platform of the All Progressives Congress (APC) have expressed dissatisfaction with the various crisis currently rocking the party and have demanded that the National Chairman, Comrade Adams Oshiomhole convene a National Executive Committee (NEC) Meeting or resign immediately.

The governors under the aegis of Progressives Governors Forum (PGF) specifically mentioned the ongoing political battle between the governor of Edo state, Godwin Obaseki and Oshiomhole himself among many others across the country.

LEADERSHIP recalls that All Progressives Congress (APC) in Edo State on Tuesday, suspended the APC National Chairman over what it termed as “his role in the crisis rocking the state chapter of the party”.

The decision followed the vote of no confidence passed on Comrade Oshiomhole by the Chairmen of the APC in the 18 Local Government Areas (LGAs) of Edo State.

However, In a statement made available to newsmen Wednesday morning in Abuja and signed by the PGF’s Director General Salihu Moh. Lukman, the forum asked “Why is it impossible to convene a NEC or even National Caucus meetings, which are supposed to hold every quarter to resolve all these issues? Why should the NWC under Comrade Oshiomhole continue to imagine that it can conduct affairs of the party without mandatory meetings of party organs?

What legacy is Comrade Oshiomhole hoping to achieve as a National Chairman by running the party in a way that suggests almost zero commitment to issues of party development?”

While demanding for a statutory NEC meeting, the governors said: “In the current circumstance, nothing short of a NEC or National Caucus meeting of the party can resolve all our increasing organisational challenges as a party. It is either Comrade Oshiomhole respect the provision of party constitution and convene superior organ meeting to deliberate on all our challenges, or he should just accept his inability to manage the party and simply resign.

“Our national leaders must rise to the challenge facing us as a party and take all necessary measures to convene superior organ meetings to begin to resolve all our challenges as a party. The current public disgrace must end!”

The governors said it is very painful for many of them who have had the privilege of being mentored by Comrade Oshiomhole to see him being devalued to a local factional leader from a very high pedestal of an illustrious national leader.

“As National Chairman, Comrade Oshiomhole hardly appreciate that he now has a national constituency and not just a state constituency, which may have been responsible for his apparent intemperance in the handling of matters affecting Edo State. I wish he paid similar attention to handling of issues affecting Rivers and Zamfara states during the 2019 elections.

“Information coming from Edo State indicate that members of the State Executive Council of APC have passed vote of no confidence on Comrade Adams Oshiomhole, National Chairman of our party, APC.

In so many respects, it could be argued, it is a natural outcome of unfolding power play between Comrade Oshiomhole and Governor Godwin Obaseki since June 2019 with the contentious inauguration of the Edo State House of Assembly. Possible retaliatory response from both Comrade Oshiomhole and groups such as Edo Peoples Movement who are loyal to Comrade Oshiomhole should be expected. In other words, the could be counter pronouncement suspending Governor Obaseki.

“Side by side with the news of the vote of no confidence was also the discomforting report of the Federal High Court judgement in Abuja disqualifying Biobarakuma Degi-Eremienyo as our Deputy Governorship candidate for the November 16, 2019 Bayelsa election. While expecting that every necessary step will be taken to vacate the judgement, it is very depressing for every committed party member to be subjected to such ignominious reality, which only remind us of our reckless conducts in states like Zamfara, Rivers, Bauchi and Adamawa, which chiefly gave away electoral victories to PDP.

“Instead of focusing on working to win elections, we are busy undermining ourselves. All these are ominous signs that we are about to re-enact the Zamfara, Rivers, Bauchi and Adamawa experiences in Bayelsa. It is Bayelsa today, Anambra, Edo and Ondo are being setup for similar experiences.

Somehow, unfortunately, the National Executive Council (NEC) of the party, which is the organ vested with the statutory responsibility of responding to all these challenges appear to be suspended. The last time it met was August 2018. In its place, the National Working Committee (NWC), which is an administrative organ with the responsibility of implementing decisions of NEC and other higher organs seems to have usurped the powers of NEC.

“Sadly, even the NWC, as at today, is a shadow of itself, as it has lost many members either on accounts of appointment into government or controversial suspension. For instance, Otumba Niyi Adebayo, Deputy National Chairman (South) is today a Minister of the Federal Republic.

“We may recall that in June 2019, the NWC allegedly suspended Governor Rotimi Akeredolu SAN. During the 2019 general elections, on accounts of the roles of former Governors Rochas Okorocha and Ibikunle Amosun against the candidates of the party, they were similarly suspended. Whether all these actions are permissible by provisions of the APC’s constitution is highly contestable.”

Charlyboy Speaks On Getting Appointment From Imo Governor-Elect, Ihedioha