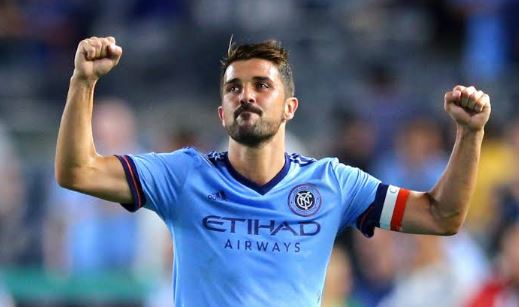 The 37-year-old has been playing for Japanese side Vissel Kobe alongside former barcelona star andres iniesta,this year with three league matches remaining before an Emperor’s Cup semi-final in late December.

At a press conference on Wednesday, Villa revealed he will be hanging up his boots, declaring he wanted to finish his career on his own terms.

“I’ve been thinking about this for a long time,” Villa said. “This is the result of discussions I had with my family and people around me.

The 2010 World Cup winner is determined to end his career with one final piece of silverware, taking to social media to clarify he intends to play on in the Emperor’s Cup. 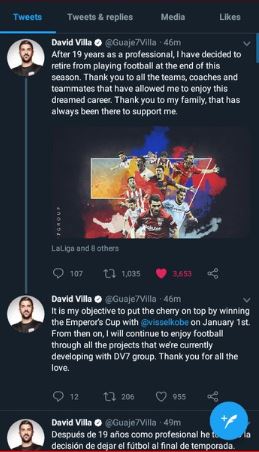 “It is my objective to put the cherry on top by winning the Emperor’s Cup with Vissel Kobe on January 1,” he said on Twitter.

“From then on, I will continue to enjoy football through all the projects that we’re currently developing with DV7 group. Thank you for all the love.”

Villa’s career has spanned 19 years and began in Spain with Sporting Gijon before subsequent moves to Zaragoza, Valencia, Barcelona and Atletico Madrid.

After spending most of his club career in his homeland, Villa then ventured to MLS side New York City in 2015, where he spent four seasons before joining Kobe earlier this year.

The attacker has scored 12 times and contributed two assists across 26 appearances this campaign, with the club currently 10th in the J-League.

“I lived and played in New York for four years. I know what a special place Queens is,” Villa said. “I love the cultures, the food, the people and their passion for life and, of course, soccer.

MURIC Supports The Proscription Of Shi’ites